The construction of a waterway across a narrow strip of land that separates the Vistula Lagoon and the Gulf of Gdańsk – referred to as the Vistula Spit Canal – has come under fire from Russia since the moment it was launched by the current Polish government. As this project of strategic importance to Poland in terms of national security and interests continues, different Russian propaganda outlets have stepped up their efforts to question its reasonableness or to denigrate it.

The project comes under pressure from propagandized articles posted to websites notorious for disseminating the Kremlin’s narratives. These efforts aim to torpedo the construction of the navigation canal and any steps taken by the Polish government in that direction, with the ultimate goal to impede the completion of the project.

Below is a brief analysis of the narratives Russian propaganda uses most often to attack the construction of the Vistula Spit Canal.

As suggested by Russian propaganda, the construction of the navigation canal across the Vistula Spit is pointless in terms of both economy and the security of Poland. The analyzed Russian websites push a narrative that Poland will loose on this investment and even be hoisted by its own petard. They argue that the canal will not be adapted to receive bigger vessels. As a consequence, Russia will be the only country to benefit from the new waterway, as it has a proper fleet. Furthermore, the only cargo to be shipped through the canal will be Russian coal. In addition, the canal will provide another route for the Russian soldiers.

Apart from these brazen pieces of disinformation, more sublime narratives are pushed, namely the analyses of the project’s cost-effectiveness by the alleged experts. Also, the construction of the canal is portrayed as a manifestation of the current Polish government’s gigantomania and anti-Russian obsession. 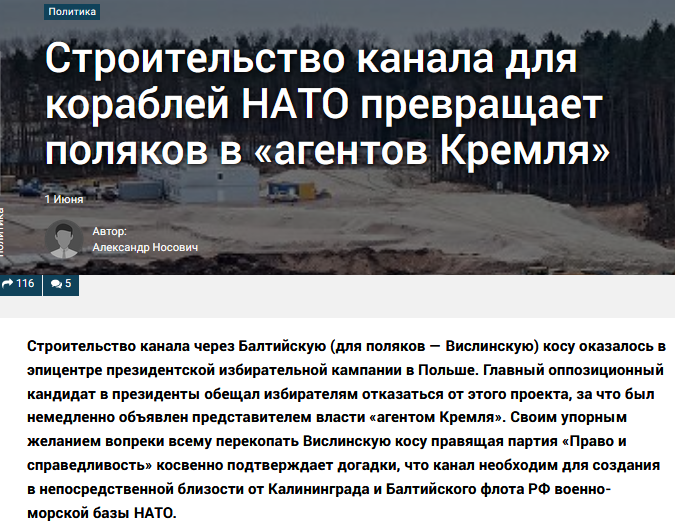 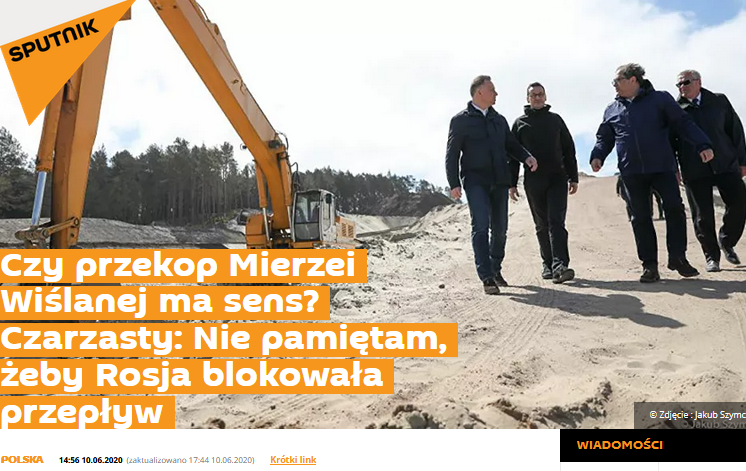 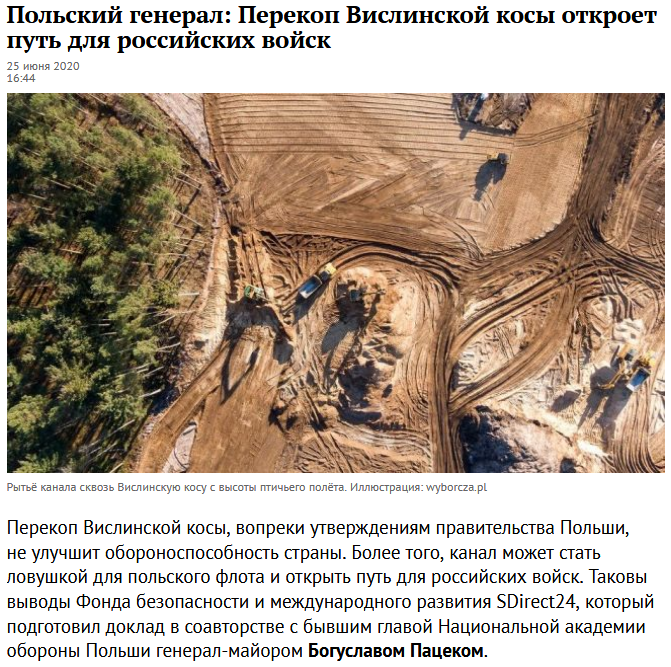 A cause of an environmental disaster

The pro-Kremlin mouthpieces abound in narratives suggesting that the natural environment will be severely affected by the construction of the navigation canal across the Vistula Spit. And so it is suggested that some species of fish and birds will become extinct. In addition, the supply of potable water to the city of Elbląg (PL) and Kaliningrad (RUS) is to be impeded. The investment will also take a toll on the local tourism industry, with beaches devastated and tourist traffic minimized. As a consequence, the citizens of Krynica Morska (the most popular resort on the Vistula Spit) will not be able to make a living.

Sputnik – the Kremlin’s most notorious mouthpiece – is just one of a number of outlets that make much hype about any calls of environmental protection groups on the European Commission to stop the project. 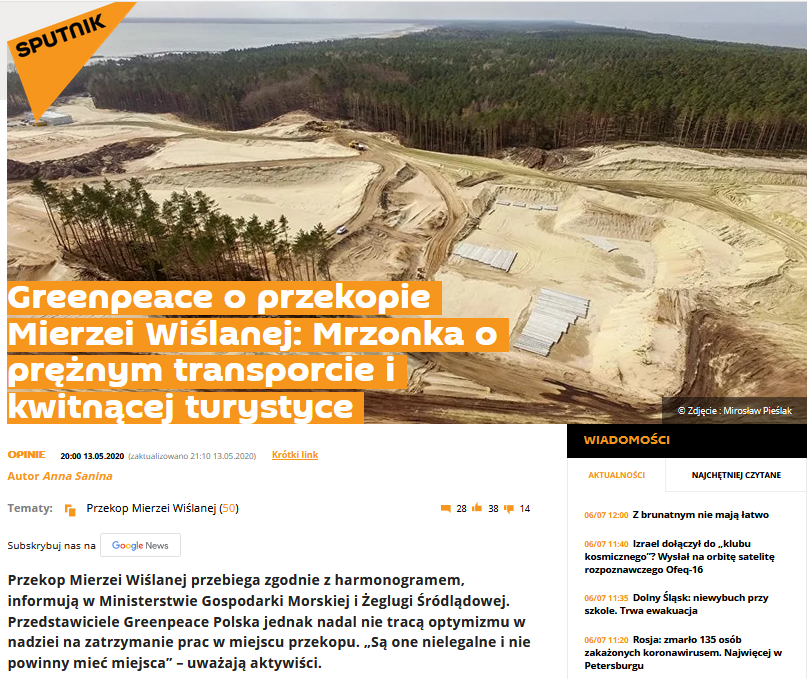 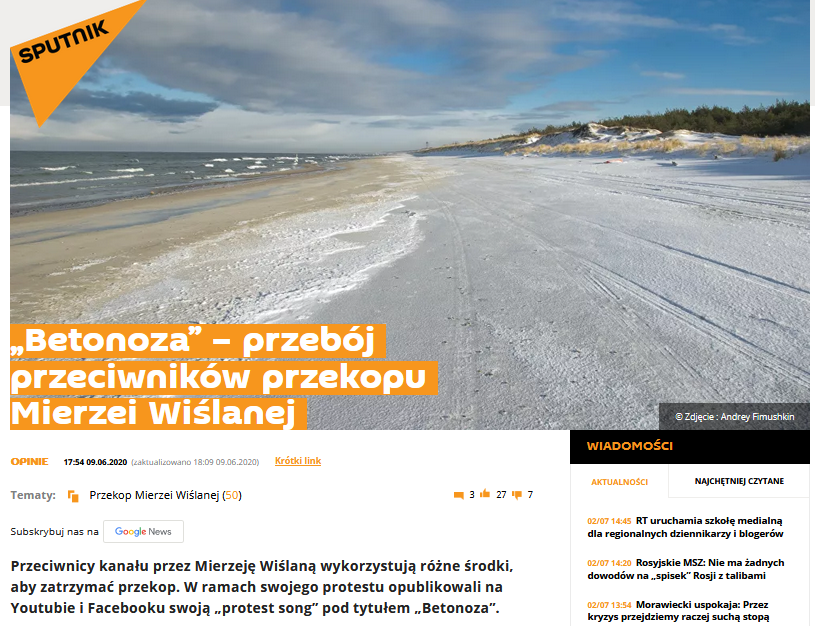 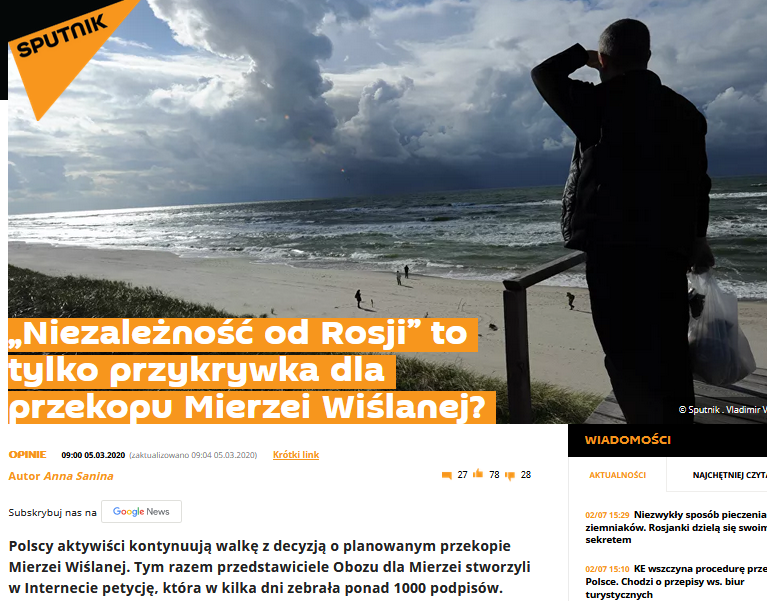 Project is too expensive, should be dropped in view of the pandemic

Amid the COVID-19 pandemic, Russian propaganda has adopted a point of view that the construction of the navigation canal across the Vistula Spit is “a senseless waste of money” and the Polish authorities should withdraw from it in view of an imminent economic crisis. Another propagandized argument is that the cost of the investment is growing exponentially, which may lead to a situation where it will have to be left unfinished. To sustain these claims Russian propaganda went as far as fabricating an expert opinion by a bogus “Polish economist named Anton Moch” (which, by the way, is not a Polish name). 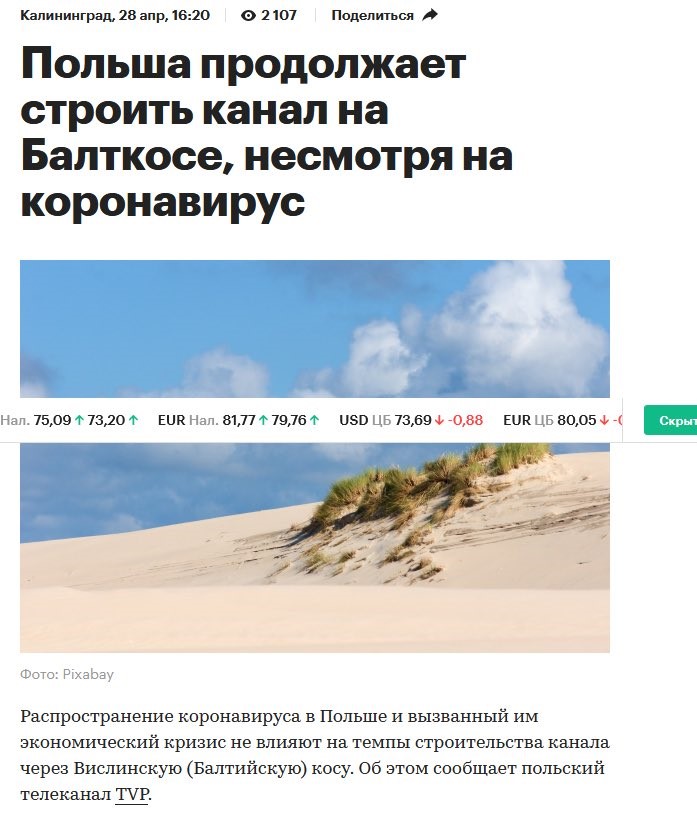 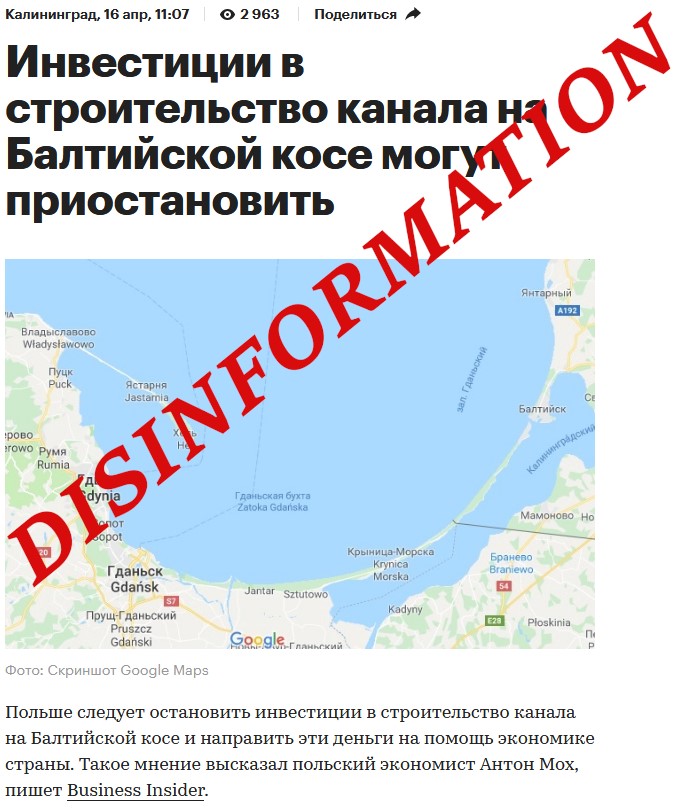 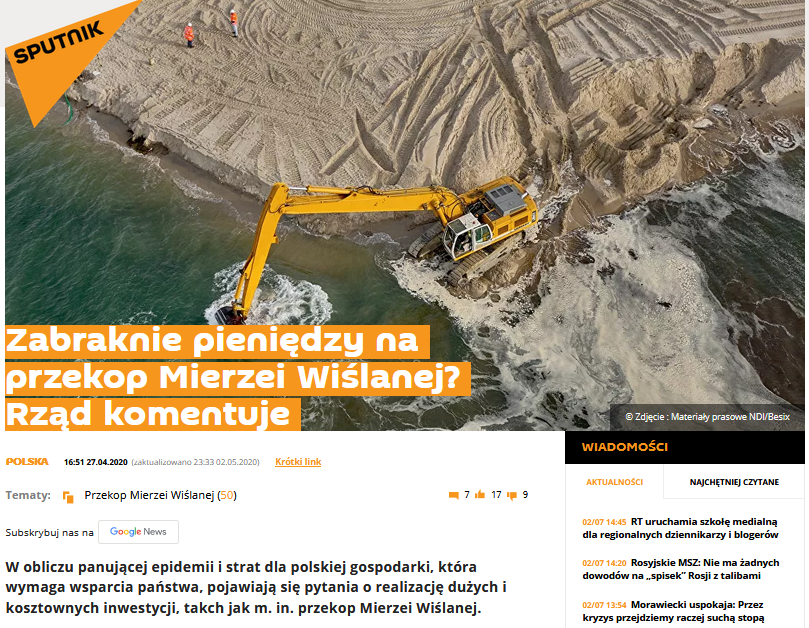 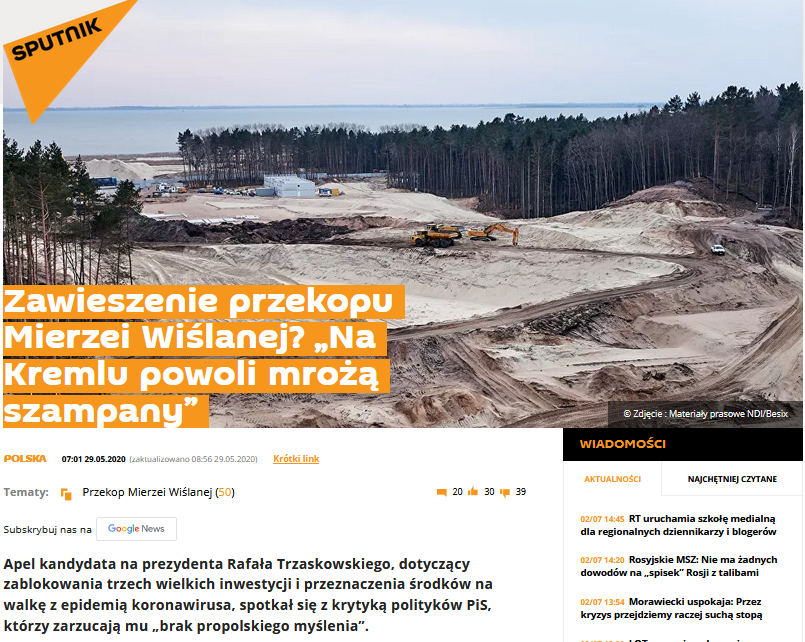 An act of lawlessness

At the same time, Russia is portrayed as a complete opposite to Poland with its eco-friendly development of the Russian part of the spit, including the construction of a bike path and recreational areas. 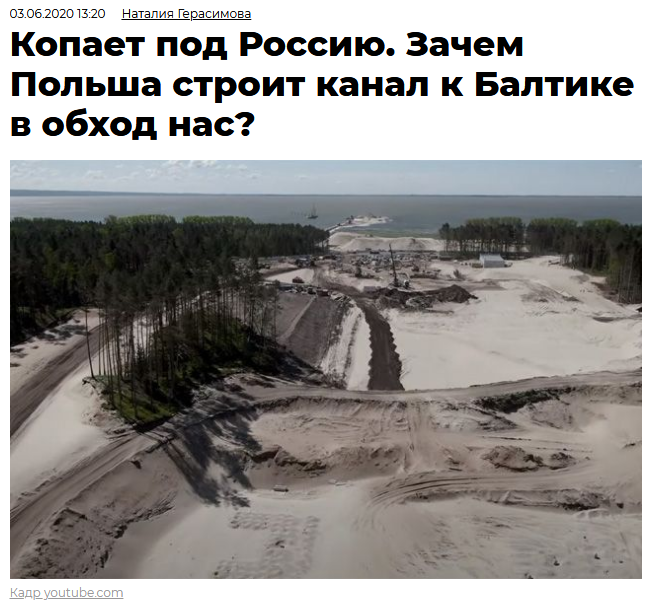 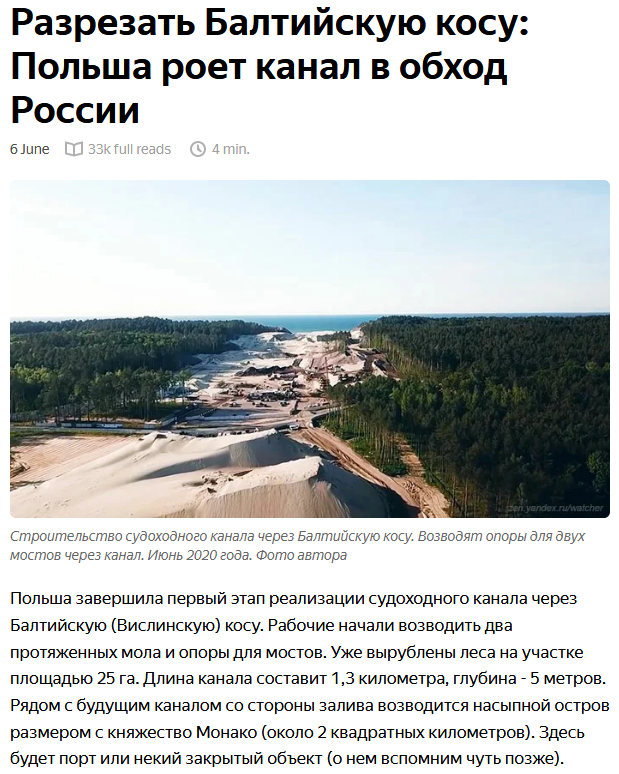 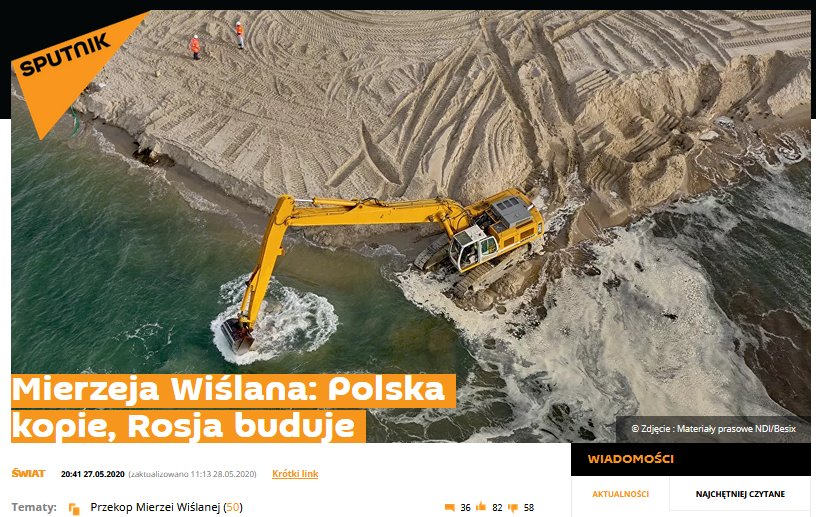 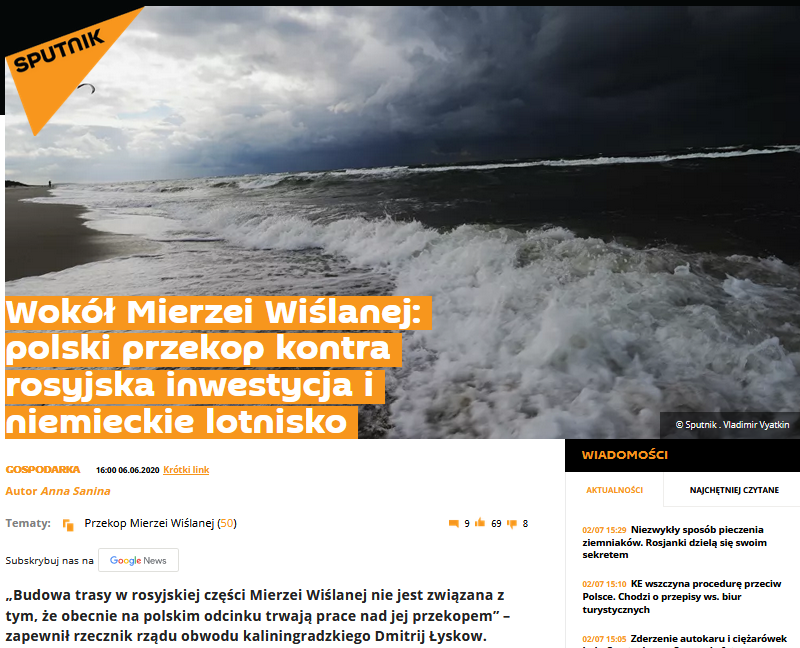 According to the websites engaged in pushing Russian propaganda, the waterway linking the Vistula Lagoon and the Gulf of Gdańsk will be a step towards building a NATO military base just next to the Kaliningrad Oblast, which will pose a direct threat to Russia. The same websites attempt to create an impression that the situation on the Vistula Spit will eventually evolve into what has been seen in the Kerch Strait between the Sea of Azov and the Black Sea. According to them, the true objective of the investment is to build a military port for the Polish Navy and the Allied forces. As put by one of the Kremlin’s mouthpieces subjected to this analysis, the construction of the Vistula Spit is “a wide operation designed to neutralize the greatest advantage of the Kaliningrad Oblast, namely being home to the main naval base of Russia’s Baltic Fleet.” 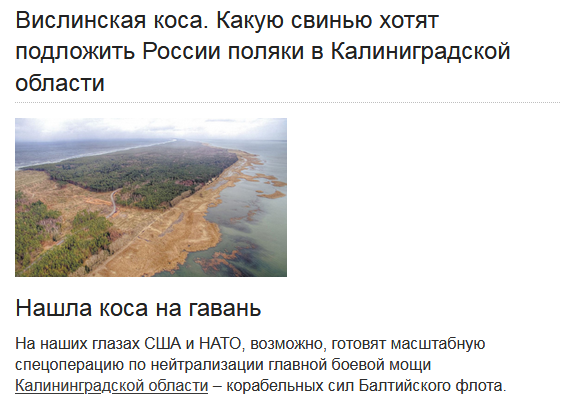 The Russian information warfare activities against the construction of the navigation canal across the Vistula Spit in Poland has all the hallmarks of a coordinated and preplanned propaganda campaign designed to produce political outcomes, namely to force Poland to drop the project. Keeping a constant pressure on the project in the information domain is complementary to Russia’s formal activities in that direction. In 2018, the Russian deputy Minister of Agriculture and the Head of the Federal Agency for Fishery Ilya Shestakov issued a letter to the European Commission in which he complained about Poland for not having consulted the project of the Vistula Spit Canal with the Russian government and accused the investment of posing a threat to the natural environment. He also urged the European body to “carry out a comprehensive analysis of possible impacts” and to “secure and implement a series of measures aimed to compensate for any damage incurred” if necessary.

This brief analysis provides an insight into the propaganda tools Russia uses to stop a project which is crucial to the modernization of Poland.